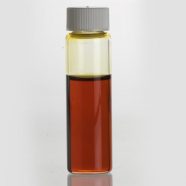 Patchouli Oil (native distilled) is a dark orange or brownish-colored, viscous liquid, possessing an extremely rich, sweet-herbaceous, aromatic- spicy and woody-balsamic odor. An almost wine- like, ethereal-floral sweetness in the initial notes is characteristic of good oils although this topnote can be absent or masked in freshly distilled, otherwise good oils. The odor should remain sweet through all stages of evaporation. Patchouli oil will remain perceptible on a perfume blotter for weeks or months, and the sweetness is almost sickening in high concentration. Dry or tarlike notes should not be perceptible throughout the first hours of study of the oil on a blotter, and cade-like, dry cedarwoodlike odor which may appear in the topnote should rapidly vanish and give way to the rich sweetness.
Arctander, Steffen . Perfume and Flavor Materials of Natural Origin

Patchouli (Pogostemon cablin) is a species of flowering plant in the family Lamiaceae, commonly called the mint or deadnettle family. The plant grows as a bushy perennial herb, with erect stems reaching up to 75 centimetres (2.5 ft) in height and bearing small, pale pink-white flowers.

It is native to the island region of Southeast Asia, including Sri Lanka, Indonesia, the Malay Peninsula, New Guinea and the Philippines. It is also found in many parts of North East India.  Noted for its fragrant essential oil, it has many commercial uses and is now extensively cultivated in tropical climates around the world, especially in Asia, Madagascar, South America and the Caribbean. Indonesia currently produces over 90% of the global volume of patchouli oil (~1,600 metric tons).