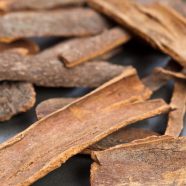 :Cinnamomum verum, called true cinnamon tree or Ceylon cinnamon tree is a small evergreen tree belonging to the family Lauraceae, native to Sri Lanka. Among other species, its inner bark is used to make cinnamon.

The old botanical synonym for the tree—Cinnamomum zeylanicum—is derived from Sri Lanka’s former name, Ceylon. Sri Lanka still produces 80–90% of the world’s supply of Cinnamomum verum, which is also cultivated on a commercial scale in the Seychelles and Madagascar.

Cinnamon Bark Essential Oil is produced by steam distillation of the bark.