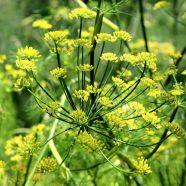 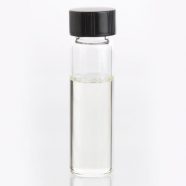 “Sweet Fennel Oil is a colorless or pale yellow liquid with a very sweet, but slightly earthy or peppery-spicy odor and a clean, sweet-aromatic dryout. There is a hint of a fruity-fresh topnote in fresh oils. The flavor is warm-spicy, aromatic, then sweet and only faintly burning.”
“Synthetic anethole is now produced in such a pure and organoleptically acceptable quality that the anethole-carrying essential oils have little to offer in the countries where synthetic anethole is produced or readily available. In rough terms, Sweet Fennel Oil is hardly more than an anethole, modified with limonene, phellandrene and trace amounts of other components which exercise surprisingly little influence upon the odor and flavor of the oil.”
Arctander, Steffen . Perfume and Flavor Materials of Natural Origin
Category: Essential Oils Tags: CAS 8006-84-6, Foeniculum vulgare, sweet fennel oil

Fennel (Foeniculum vulgare) is a flowering plant species in the carrot family. It is a hardy, perennial herb with yellow flowers and feathery leaves. It is indigenous to the shores of the Mediterranean but has become widely naturalized in many parts of the world, especially on dry soils near the sea-coast and on riverbanks.

The aromatic character of fennel seeds derives from volatile oils imparting mixed aromas, including trans-anethole and estragole (resembling liquorice), fenchone (mint and camphor), Limonene, 1-octen-3-ol (mushroom). Other phytochemicals found in fennel seeds include polyphenols, such as rosmarinic acid and luteolin, among others in minor content.

The oil is steam distilled from the seeds.