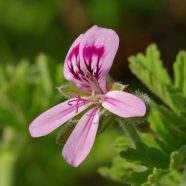 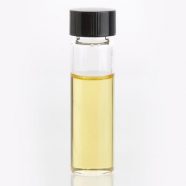 One of the most important and irreplaceable essential oils in perfumery is Geranium Oil. It does not range among the first 20 oils in quantity annually produced if we include all types of essential oils (industrial oils, flavor oils, perfume oils). But considering its value, we will find Geranium Oils very high on the list of all the perfumery oils, if not at the very top of the list.
Arctander, Steffen . Perfume and Flavor Materials of Natural Origin

Pelargonium graveolens is an uncommon Pelargonium species native to the Cape Provinces and the Northern Provinces of South Africa, Zimbabwe and Mozambique. The common P. ‘Graveolens’ has great importance in the perfume industry. It is cultivated on a large scale and its foliage is distilled for its scent. Pelargonium distillates and absolutes, commonly known as “geranium oil”, are sold for aromatherapy and massage therapy applications. They are also sometimes used to supplement or adulterate more expensive rose oils.

A modern analysis listed the presence of over 50 organic compounds in the essential oil of P. graveolens from an Australian source.  Analyses of Indian geranium oils indicated a similar phytochemical profile, and showed that the major constituents (in terms of % composition) were citronellol + nerol and geraniol.